The process to analyse the above metals with Fire Assay Crucibles is the fire assay method. It consists of melting a sample along with other assay fluxes under high temperature, and reducing conditions. It is possible to Fire Assay the  following materials:

● Ores coming from Gold mines,  and Geological Labs. This ores consists of samples of drill cores, trenches or grabbing.

Our universal fire assay crucibles and ashes assay crucibles material of construction is fireclay mixed with other refractory materials. They withstand temperatures up to 1300`C.

This composition and their design give them an excellent resistance against flux attack, erosion, cracking and thermal shock. They can therefore work under harsh conditions, and have a longer life. Furthermore, they have a high resistance to thermal shock,  and produce a faster fusion,  and constant melting speed .

Another important feature of our crucibles, is that they are very stable because of their wide base. This is particularly relevant for furnaces that have an irregular ground due to flux attack and erosion.

The Universal Fire  Assay Crucibles  most common use is to melt auriferous ores and concentrates.

Their design allows nesting, and we therefore obtain an optimal space utilization in the warehouse, and minimal transport costs to any location.

The capacity of these crucibles ranges  from 1 to 2-¼ assay-tons and suit most Assayers’ jobs. :

SEE ALL OUR CRUCIBLES >> 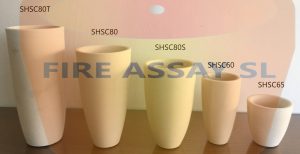 Scorifiers application is very similar to fire assay crucibles. However in their case we flux-melt” the sample under high temperature and oxidizing conditions. It is possible to scorify the same samples as with the Fire Assay Crucibles and Ashes Assay Crucibles, but they need to  be in the form of powder.

Our scorifiers are highly resistant to thermal shock and have aslo a high chemical resistance against flux attack (particularly borax and litharge).

Since many centuries, Fire Assay is the traditional method to determine the metal contents of a sample. Typically, this sample is an ore or some kind of residue with some precious metal contents (Gold, silver and platinum group Metals). Although the method is very old, it is highly accurate and widely used.

The principle of Fire Assay is to separate the metals from the other components of the sample. At the end of the process we weight the separated metals in order to determine the amount of precious metals present in the original sample.

It is possible to complete the Fire Assay process, whether with a reductive fusion with Fire Assay Crucibles, or with an oxidative fusion using Fire Assay Scorifiers.

To separate the metals, it is necessary to first mix the sample with fluxes such as:

The first step of the process consists of mixing the samples with the above fluxes (and or others). Then we place the mixture in Crucibles (or Ashes Assay Crucibles) for fusion at 1250ºC. Under these conditions and with these fluxes, a reduction of the metal oxides present in the sample takes place. The litharge added at the beginning reduces also into lead and acts as a “solvent” for the metals. This lead rains down / precipitates at the bottom of the fire assay crucibles and forms a metallic lead phase. On top of the lead, there is a slag phase. We have therefore two phases:

Separation of the lead phase from the slag

At this point there are two possibilies.

After this, we again separate the button from the slag to further analyse it using the cupellation method. The point of pouring the contents of the  fire assay crucibles in a mold is to reuse them and reduce costs. It is possible to reuse our Fire Assay Crucibles several times depending on the chemical aggresivity of the fluxes.

It is also possible to perform the Fire Assay process with scorifiers instead of crucibles. To follow this process, the sample needs to be in a powdery form.

First, we mix our sample with about half the amount of granulated lead that we will put in the fire assay scorifier. Once this is done, then we spread the rest of the lead on top of the sample and then the necessary borax.

Then it is necessary to place the scorifier in the oven for about 30 minutes. After this, the surface of the scorifier is covered with litharge and if we pour its contents into a mould, we will again obtain a lead button phase at the bottom and a slag phase. As per the Fire Assay process with Crucibles, the lead button is separated from the slag for cupellation.

Assay Ton (AT) and its use

The assay- ton is a unit of mass. It is a weight in miligrams equivalent to the number of ounces contained in a ton.

Because of the way it is defined, the assay ton is very useful as it saves many conversion calculations. The reason is that the result of in mg of gold found in the fire assay crucibles is directly equal to the number of ounces of gold per ton of ore.

Generally, MATTE or Regulus forms during the fusion of ores containing sulphides with postassium nitrate (niter) as a fluxing agent, and if the charge is too acid (for instance if we use too much silica).

Matte is very brittle, has a composition similar to lead sulphide (galena) and its colour is blue -gray . We find it between the lead button phase and the slag. If a lot of Matte is present, it will form a thick layer. On the other hand, if little Matte is present, it appears under the form of grains on top of the lead phase.

The problem with Matte is that it always contents a part of gold and silver of the assay. Furthermore, since it is so brittle it breaks and mixes with slag when we separe the lead button from it.

In Fire Assay, SPEISS is usually an iron arsenide with a composition similar to Fe5As. However, sometimes we obtain a nickel or cobalt arsenide, and even more rarelly an antimony speiss. In assaying, we form speiss when we use the iron method on ores containing arsenic. Contrarely to Matte, It is hard,  and quite tough. The  colour of  speiss is tin-white, it also appers on top of the lead, and it is very weel glued to it.

If only a small amount of arsenic is present in the ore, the speiss will appear as a little button lying on top of the lead. On the other hand, if much arsenic is present, the speiss forms a layer entirely covering the lead. It carries some gold and silver, but if it weights less than a gram, it is possible to cupel it with the lead. Speiss  will therefore oxidize, and its precious metals contents will dissolve in the the lead bath. It is very difficult to work with large amount of speiss because it is difficult to scorify. (Bugbee p. 15)

One way to avoid the formation of speiss and matte is to charge a sufficient excess of litharge and soda in the fire assay crucibles to keep antimony, arsenic and sulfur oxidised.

0
We use cookies to ensure that we give you the best experience on our website. If you continue to use this site we will assume that you are happy with it.OkPrivacy policy